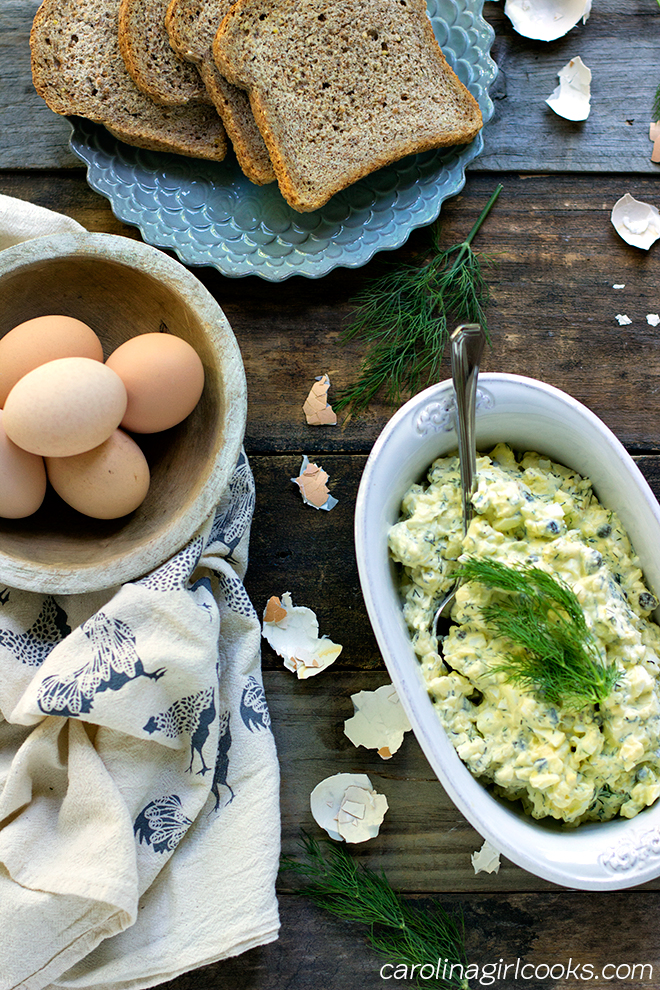 My parents have been renovating their house over the last eight months and they are now in the middle of a huge kitchen renovation.  My mom is an incredible cook, and she has always wanted a really great cook’s kitchen, which she’s finally getting.  Before, when you walked into my parents house from the side door, you walked into a hallway that had a door on the right that goes into my dad’s office that we have always called the “little den,” and bookcases on the left.  If you proceed down the hall there is an open doorway on the left that went into the kitchen and breakfast area.  The breakfast area was in a nook that backed up to the wall where the hallway from the side door is and the dining room.  They have completely opened this space up, so now when you come in the side door to the house, you basically walk into a huge open hallway and into the kitchen area.  The hall still has the door to the little den on the right, but they removed the bookshelves on the left and moved the door from the laundry room (that used to be accessible from the kitchen) to the hallway when you come in the door, making it more of a mud room with a sink and the washer/dryer.  Mom found this incredible old door at an architectural warehouse up in Landrum, South Carolina that has this big Tiffany stained glass inset in it of a flower pot.  I’m doing a terrible job describing it, but it looks like it was taken from an old 1930’s Victorian house up in Asheville.  It has this wonderful vintage essence to it and it’s such a statement when you come in the door.  When I was over there the other day, Dad propped it up against the doorway with the laundry room light on and it just glowed!  It was so pretty.  I’ll try to snap a picture of it the next time I’m over there and post it on instagram so you can see what I’m talking about.

When you walk into the open kitchen space now, there are cabinets and counter space in a U shape around the kitchen exterior, an island in the center with seats around it and they took out the wall dividing the breakfast room and dining room and created one big dining space.  So the kitchen if you were to look at it from above is more of a T shape now.  It’s looking really spectacular and they have let my sister and I weigh in on some of the design decisions, which has been fun.  It’s like getting to redo my own kitchen without having to live through it.

If you’ve ever redone a kitchen, you know it’s sort of a nightmare.  My kitchen renovation took so stinkin’ long, I was out of a kitchen, for I’m not kidding you, eight months.  I was ready to murder the contractors towards the end of the project.  Eight months is beyond too long, but in the end, the kitchen turned out beautiful.  It’s where I spend 90% of my time in the house.  It’s my office, where I eat and half the time where I watch tv.

Anyways, while mom and dad have been without a kitchen, they’ve been the perfect suspects to load up with blog food.  I cook so much, it’s impossible to keep and eat everything I make, so I’m usually dishing it out to friends, family and neighbors.  I asked mom if there was anything particular she wanted and she said she was craving egg salad.  Perfect!  I’m not gonna eat it, and it still gives me a way to put something of variety on the blog.  Since I’ve never made it before, I had to get her to tell me what she puts in hers when she makes it at home.  It’s exactly how I make tuna salad, so that was easy and I’m happy to report it got a two thumbs up from her and Dad.  Yaaaay!

This is a very springy way to make egg salad and it’s definitely not the traditional southern way.  I don’t think… Then again, I’ve never eaten egg salad, so I’m probably not the best person to weigh in on that.  I always thought it was loaded down with pickle relish and mayonnaise (gag), but I could be wrong.  I made mine with mostly greek yogurt and a touch of mayo.  Mom didn’t seem to taste the difference, so I say go with greek yogurt if you can.  If egg salad IS your thing, I would think it would be a great item to serve at a ladies brunch for a bridal or baby shower, to make ahead for lunches during the week, or you could even serve it as an appetizer with toasted baguette slices.

*The eggs used in this recipe are from Mother Earth Produce, so be sure to check out there add ins on their site if you’re a bin subscriber.  If you’re not and would like more information about this wonderful company, click here.  Also, note the adorable chicken hand towel in the photos!  This is from The High Fiber company up in Asheville, North Carolina.  I’m obsessed with their textiles and designs.  Check them out to stock your own house and for great gift ideas.

Place the eggs in a pot of cold water and slowly bring them up to a boil over medium high heat.  Let them boil for about 1 minute.  Remove them from the heat and cover them, letting the water cool down.

Peel the eggs and place them in a bowl.  Chop with two knives in the bowl until they are in bite size pieces.

Add in the yogurt, mayo, mustard, dill, capers and a sprinkle of salt and pepper.  Mix together well.  Taste to adjust the seasonings.

Refrigerate until ready to use. 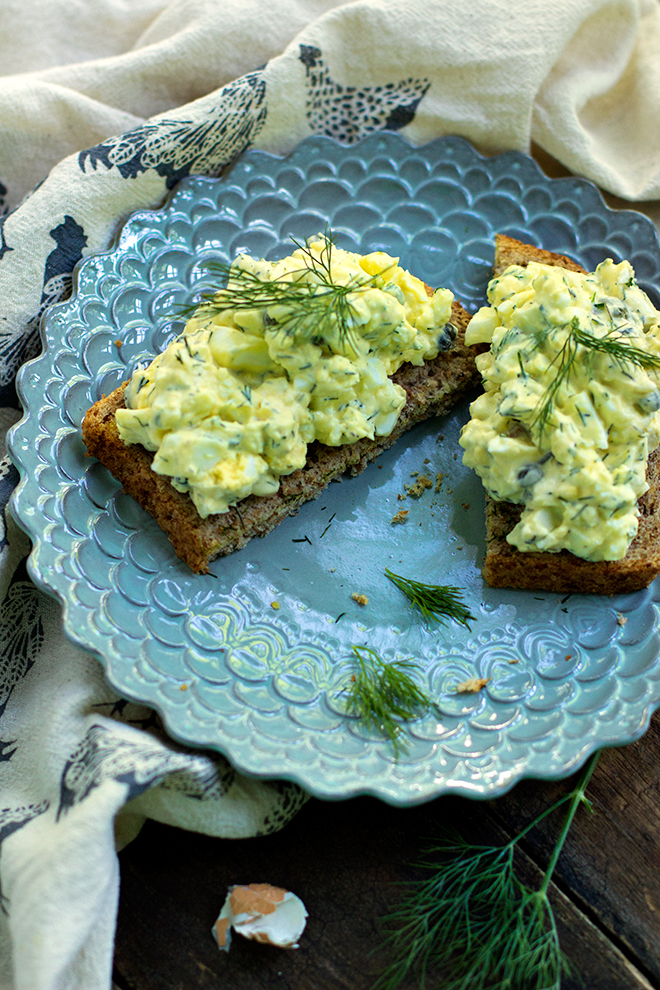 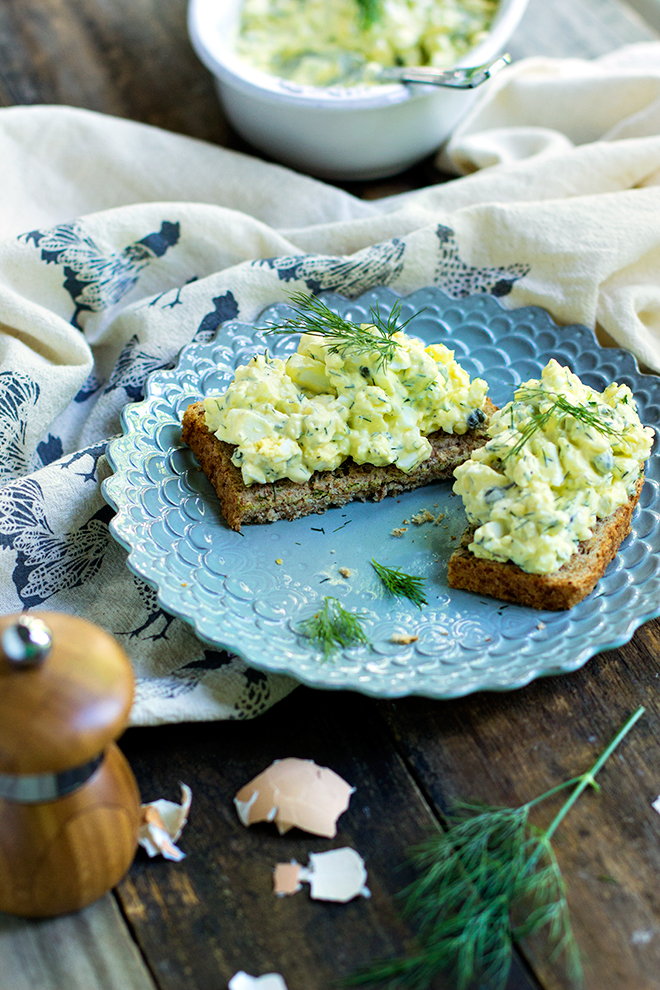 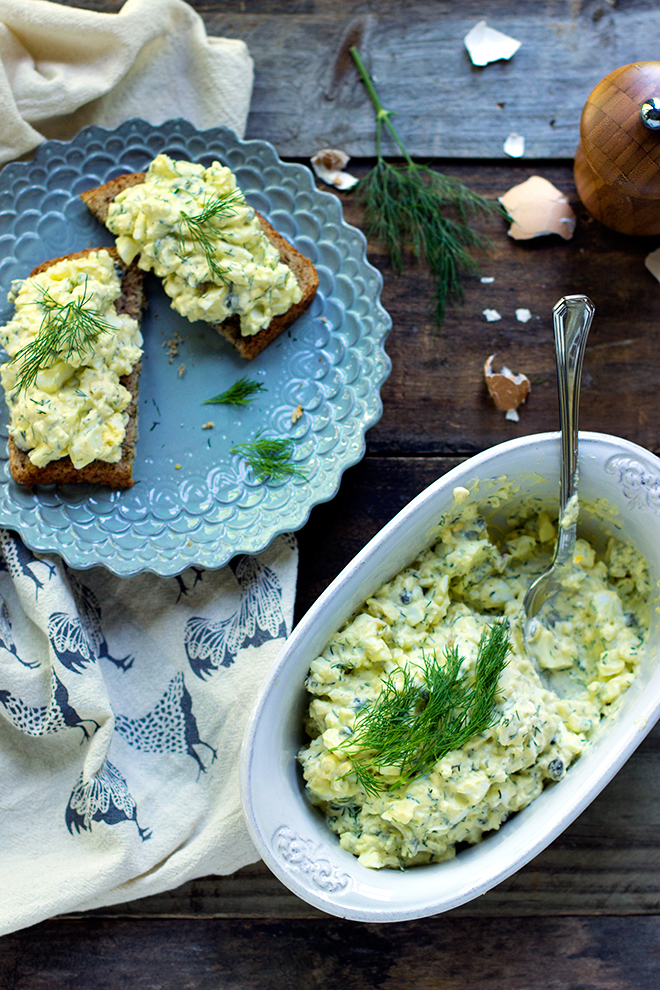